Home / News / Who Is Laufey in Norse Mythology?

Who Is Laufey in Norse Mythology?

Laufey, sometimes called Nal, is a figure in Norse mythology and the mother of Loki. Loki is frequently mentioned by the matronymic Loki Laufeyjarson in Eddic poetry, as opposed to being talked about in the traditional patronymic Loki Farbautason – a mythology where kinship is reckoned through male ancestry.

The Name Laufey, an Old Norse name, is unclear but is generally believed to be related to Lauf (foliage or leaves). It is also believed to be derived from a hypothetical tree-goddess called ‘lauf-awiaz’ (the leafy).

Laufey is a figure in Norse mythology and mother of Loki. Loki is seen as sometimes assisting the gods, while at other times he will behave maliciously towards them.

The meaning of Laufey name is believed to be related to the suffix ‘ey’ that is found in female personal names, like Porey and Bjargey.

Some scholars have suggested that since Laufey’s Spouse, Farbauti means ‘dangerous hitter’, it is linked to a possible natural interpretation of lightning hitting leaves or needles of a tree to make fire.

Laufey is mentioned among Asynjar or goddesses in one of the pulur, an ancestry that probably led Loki to be reckoned among the Aesir, as Norris Sturluson said it in Glyfaginning.

The Pros of Edda mentions Nal twice as ‘Laufey’ or ‘Nal’, once in Skaldskaparmal and once in Glyfaginning. The poem Sorla thattr mentions Laufey and Nal as the same person.

Given the fact that she was both weak and slender, she was given the name Nal to mean, ‘Needle’. However, according to John Lindow, ‘the late date of the text renders this information questionable’.

Is Laufey Male or Female?

Different sources portray Laufey differently in regards to gender. For instance, Laufey in Norse mythology is portrayed as a mother to Loki.

However, in the Marvel Universe, Laufey is portrayed as a man and father of Loki. Some sources also like the comics portray Laufey as a man-king of the Frost Giants.

In the Marvel Universe

However, Odin intervened and adopted Loki, showed him much love like his own and that Loki is saved. When he learnt about this, Loki wanted to kill his father Laufey for abandoning him.

Laufey’s themes are mostly playfulness, humor, and youthfulness. Since she is the mother of Loki, the great trickster, then she understands the value of raillery and good-intended tricks. 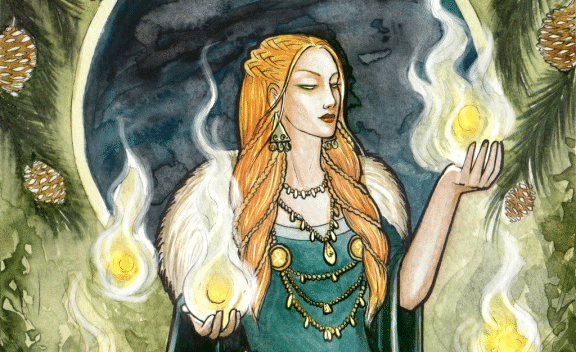 Some stories talk of Laufey giving birth to Loki when a lightning bolt sent by Farbauti struck her. Given that Laufey did not raise Loki, his foster brother did.

Odin was the most powerful Norse god. Probably this explains why Loki was the god of mischief and chaos and became an agitating Norse god. Also, Laufey, meaning ‘full of leaves’, is linked to lightning hitting needles or leaves of a tree and creating fire.

Laufey, a Norse mythology goddess, is the mother of Loki, the god of mischief and chaos. The name Laufey has got numerous meanings, like ‘full of leaves’, and is related to lightning hitting needles or leaves of trees to create fire.

Whether Laufey is male or female depends on the source that you are reading. Make sure to consider this information if you are interested in Norse mythology.

PreviousWhat Is Niflheim in Norse Mythology?