Over the last few weeks, we have taken a closer look at some of the greatest Gods in Norse mythology. As to this moment, we wrote about Thor, Frigg, and Baldur. Today, we continue our series with a story about a God who is not a superstar of Norse mythology. Yet, he is still one of the central figures of the Norse pantheon.

Let us introduce you to Tyr, a mythological example of bravery and honor.

Tyr was one of the oldest Norse Gods and a fairly famous one for Scandinavian people and those in love with Norse mythology. There are some records that he was even the leader of all Norse Gods before Odin. He was a God of War and Justice. Due to his actions during the binding of Fenrir the Wolf, Tyr is often portrayed as the bravest among Aesir Gods. But, we will get back to this part a bit later.

Let us get our story rolling from the very beginning.

We have to admit that Tyr is not among the most popular Norse Gods nowadays. We can blame Marvel movies for this (as he hasn't been included in their scenario so far) as well as a lack of written tales about him. If it weren't for Snorri's Prose Edda, we would have none of the written evidence of Tyr's importance today.

The lack of myths centered on Tyr inevitably comes as a surprise, as he was called the bravest of Norse Gods and "guarantor of justice." Moreover, he was the God who inspired courage and heroism in the Norse universe.

You would think that this kind of God will be a star figure in countless myths, and at some point, he most likely was. Unfortunately, as much of the Norse myths were passed down verbally, Tyr's legacy probably got lost over time.

Many sources from the Viking Era and before show that Tyr was one of the main Gods of War, together with Thor and Odin. One of the poems in Snorri's Poetic Edda, Sigrdrífumál, tells a story about how Sigurd, a human hero, gets advice from the valkyrie Sigrdrifa to invoke Tyr if he wants to win the battle.

In fact, even the Romans identified Tyr with their own God of War, Mars. The Romans' identifying Tyr with one of their principal gods is the additional evidence about Tyr's importance.

On the other hand, Tyr is far from being only a God of War. His primary role seems to have been a lawgiver and an upholder of justice. At first glance, war and law might look like entirely different things. However, those two are actually intertwined.

Just like a war, the law can also be used to settle a dispute. As Sun Tzu said, the best way to win a battle is without fighting. This is what law is all about.

Keep in mind, though, that this theory about Tyr being the leader of the Gods might not be entirely accurate. The word Dyeus was later transformed through common uses into Old English word Wooden, meaning Odin.

Finally, we will choose to support the theory that Tyr was indeed a leader of Norse Gods, until being overtaken by Odin, the All-Father. It is up to you to choose which theory you believe in.

Just like many aspects of Tyr's life, his patronage also remains unclear.

One theory states that his father is Odin, and his mother is Odin's wife, Frigg. Furthermore, according to this version, he is very close to his brother Thor, the God of Thunder. But, if Tyr was, in fact, the leader of Norse Gods before Odin, this theory simply cannot be true.

Another version is that Tyr's father is the jötunn Hymir, while his mother remains unknown.

There are many other theories about Tyr and his family. Unfortunately, we will never be sure which one was really true.

TYR'S ROLE DURING THE BINDING OF FENRIR 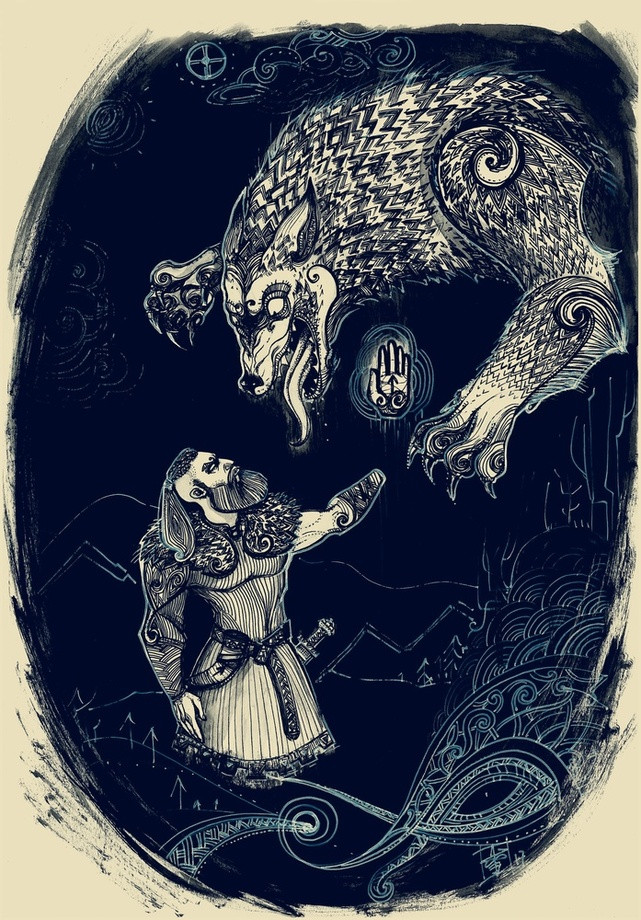 And finally, here we are. The most famous story about Tyr is the story about the binding of Fenrir. So, let's get started.

Fenrir the Wolf was a descendant of the God of Trickery and Mischief, Loki, and the giantess Angrboda. His birth was followed by a prophecy foretelling that he will eventually assist in the destruction of the whole universe. As Fenrir grew, so did his power.

Aesir Gods agreed that they have to contain him to stop the prophecy from being fulfilled. They decided to bind Fenrir. However, their first attempt to do so was not successful. With a single swift move, the Wolf quickly snapped the chain. The Gods tried once more using the shackles twice as strong, but Fenrir was simply too powerful to be contained.

The Gods were looking for a new way to imprison Fenrir when Odin dispatched the messenger underground to the master craftsmen of the black elves seeking their aid.

The dwarves agreed to craft a special shackle. They used six magical components to craft it: the beard of a woman, the root of a mountain, the sound of a cat's feet, the ligaments of a bear, the spit of a bird, and the breath of a fish. They made a chain as strong as iron and as smooth as silk. The chain strong enough to bind the powerful Fenrir.

The Wolf was enjoying attempts of the Gods to chain him as he got a chance to show off his immense strength. However, at first glance on the chains crafted by the dwarves, the Wolf started to doubt if he is going to be able to break free from those shackles. So, Fenrir demanded a show of good faith before allowing the Gods to chain him.

This is where Tyr's bravery comes in the first plan. As a show of good faith, Tyr offered to place his hand into Fenrir's mouth, guaranteeing that no harm will come to the Wolf. Fenrir accepted Tyr's offer, and the Gods were able to shackle him.

Fenrir tried to break free several times before realizing that he has been tricked. He wasn't able to break these chains. Filled with rage, the Wolf tore off Tyr's hand. This is how brave Tyr has sacrificed his hand for the greater good, for the safety of all Aesir Gods and the whole universe.

Other Gods hurried and tied up the chain to a huge rock, and so Fenrir, the fiercest of all wolves, was bound to that spot for all eternity. His howling was so loud that the Gods had to muzzle him. Finally, Fenrir would remain imprisoned until the events of Ragnarök.

Just as it has been foretold, Tyr's death came during Ragnarök, a series of events that will bring complete destruction to the whole Norse universe. Odin was the leader of the forces of light, while Loki led the forces of darkness. Gods clashed with all kinds of monsters and giants, and so the final battle between good and evil began.

Even though they were aware of their destiny, the Norse Gods bravely stood their ground and fought Loki's army. Each of the Norse Gods was matched on the field of battle with a creature of immense strength.

It was foretold that Tyr will fight Garm, the hell dog of the underworld, and indeed he was. Even though one-armed God fought bravely and managed to slay his foe, he suffered wounds that he could not recover from. This is how Tyr, God of War, and Justice met his demise.

Nonetheless, even if Garm and Fenrir are not the same entity, they undoubtedly represent the same thing, the forces of darkness breaking free to bring the complete destruction to the nine realms.

Just like Thor and Odin, Tyr also gives us one day of the week. As we have already mentioned, the Romans identified Tyr with their main war God, Mars. Nowadays, this connection can be found in the English language as a word Tuesday, originating from English Tiwesdæg, meaning Day of Tiw (Tyr). Furthermore, the name Tiwesdæg derives from the Latin Dies Martis, meaning the Day of Mars. 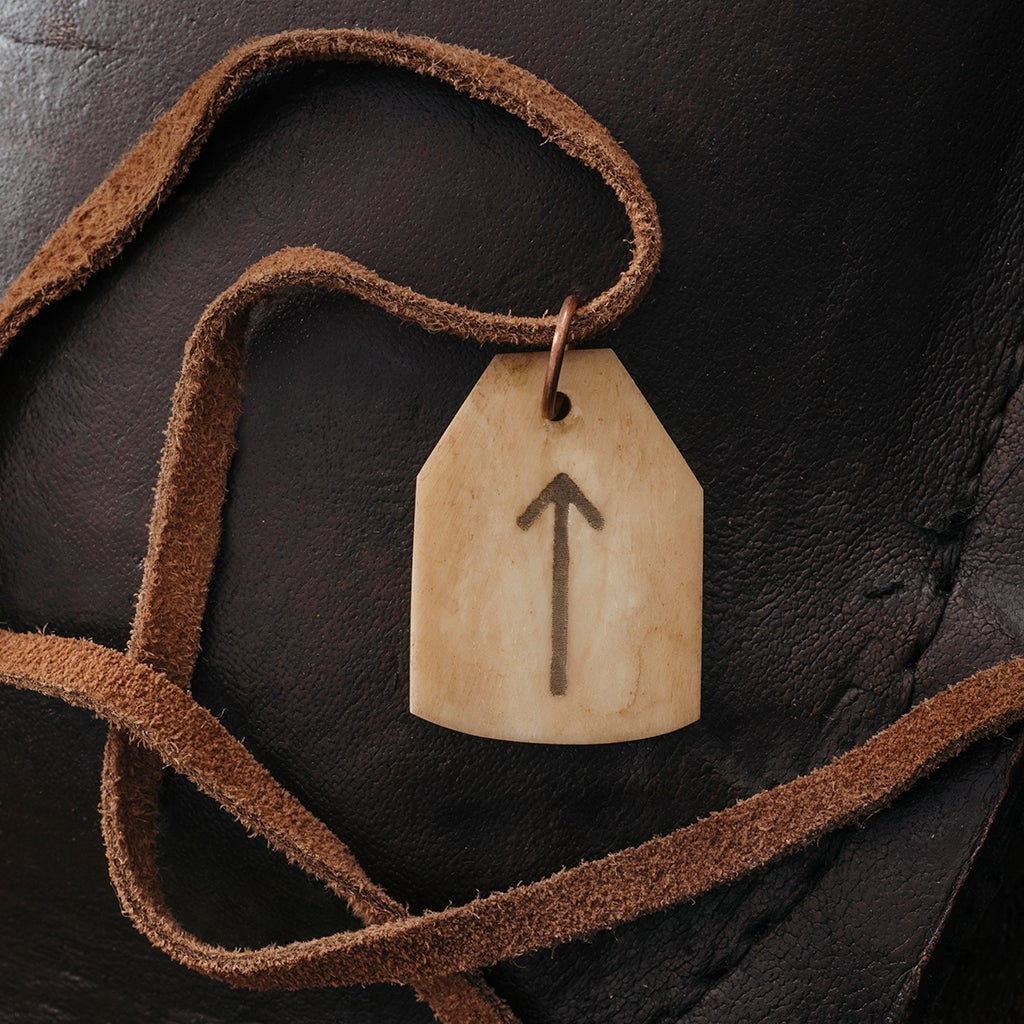 The Tiwaz rune (ᛏ) also got its name after Tyr. It is a letter of the runic alphabet that correlates to the letter "T" in the Latin alphabet.

Even though Tyr hasn't appeared in Marvel movies, he has a place in Marvel Comics. He is portrayed as a sword-carrying warrior from Asgard with supernatural powers.

In any case, there is no doubt that Tyr has a vital role in Norse mythology. Tyr was a God of War and Justice, and the bravest of all Norse Gods. And not only that, but he was perhaps the leader of Gods before Odin.

Unfortunately, we have only a few surviving myths about this powerful Norse God nowadays. We will all agree that history was cruel towards Tyr's legacy and that he surely deserved more.

Feel free to let us know what you think about countless theories that surround Tyr's character in Norse mythology in the comments below.