For the vast majority of people, art isn't the first thing that comes to mind when talking about the Norsemen. And how could we blame them? For many decades shipbuilding, navigating, and warfare were the number one media topics when talking about the Viking age. But just because some medieval day Scandinavians were famous seafarers, we shouldn't take the spotlight from those Viking men who preferred to stay at home creating art.

A common misconception about the medieval Norse people is that they had little time to express their artistic abilities because they were often waging wars. This stigma also comes from the stereotypical view that only delicate and soft people can consider themselves artists. And as you know, Viking men were famous for everything but those characteristics. Today we are delighted to finally end these theories once and for all, for they have nothing to do with the truth. Not only did the Norse people create art during the Viking age, but they were also exceptional at it.

WHAT KIND OF ART DID THE VIKINGS MAKE? 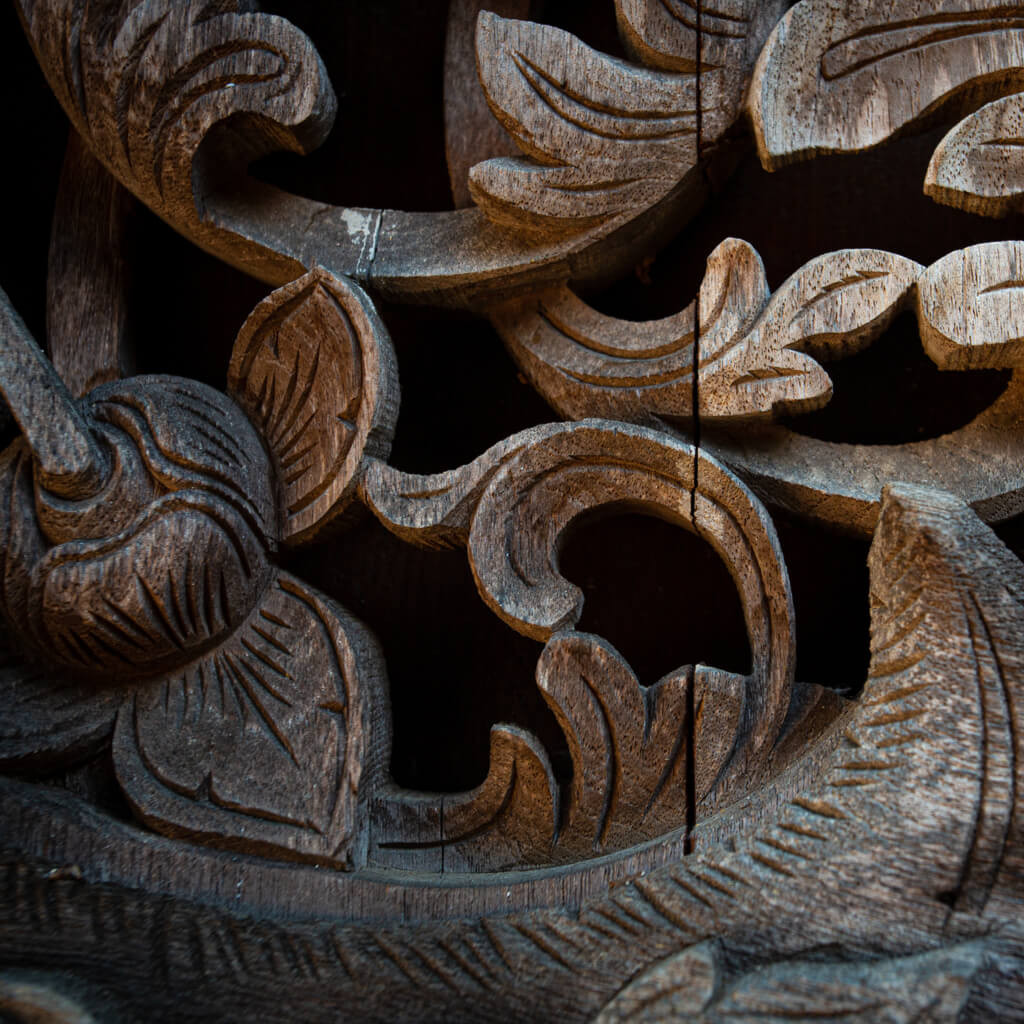 Unlike today, most people didn't believe in the phrase 'art for art's sake' during the Viking age. You can find the proof of this in the fact that there are hardly any examples of Viking objects that served no purpose other than being aesthetically pleasing. For the most part, Viking art was practical. And Viking age artists preferred to leave their mark by decorating the objects that were already in use.

WHAT ARE THE SIX STYLES OF VIKING ART?

As time went by, Viking art was getting more and elaborate.

So once archeologists spotted the differences based on the historical period in which the Norsemen created certain artifacts, they decided to classify Norse art history into six styles.

The crucial thing to remember is that just because a particular art style was more prevalent during a specific period, it doesn't mean that it completely replaced the previously favored style immediately. The more probable theory is that a new style started as a slight change that gradually evolved into a new Viking art form.

The styles got their names after geographical sites where they were found, and we know them today as Oseberg, Borre, Jelling, Mammen, Ringerike, and Urnes. 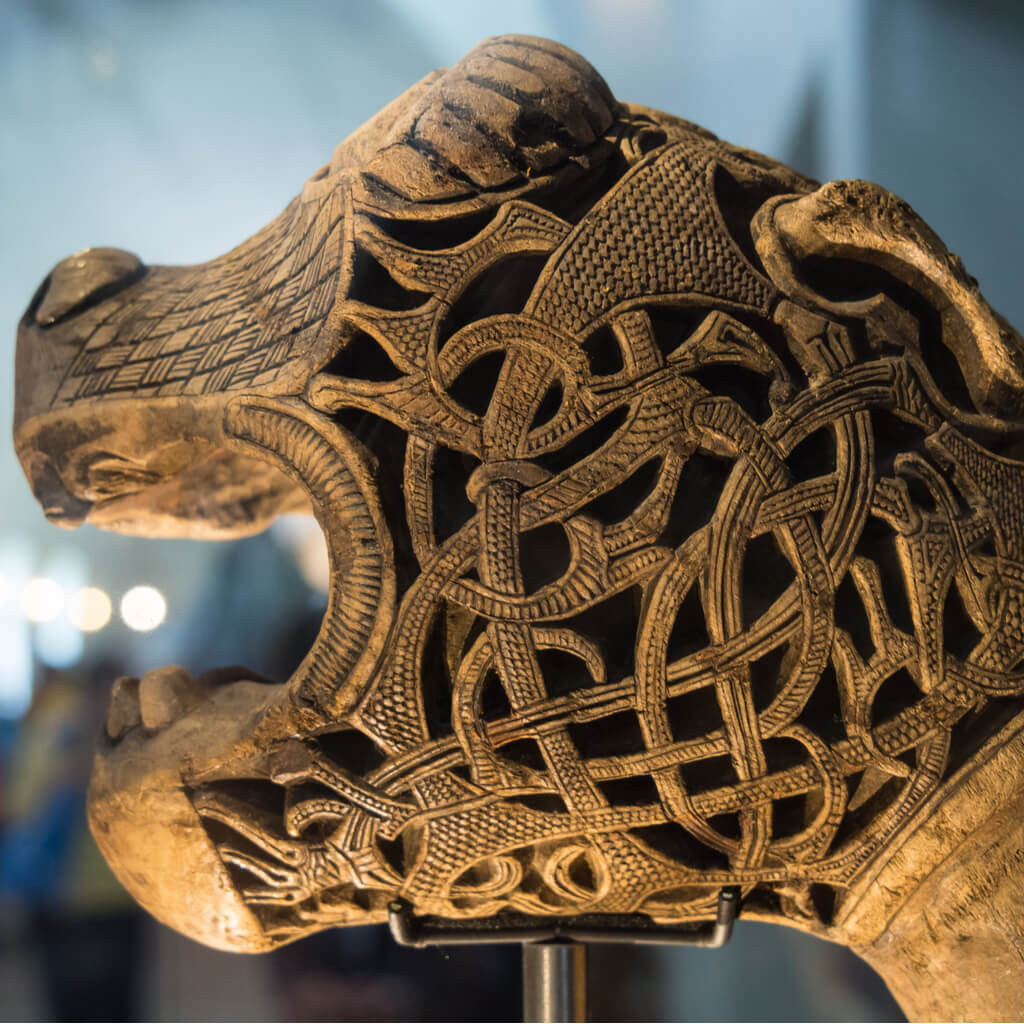 Viking art style that appeared in the early 9th century and was used all over Scandinavia for at least eight decades is called Oseberg.

Fundamental motifs Viking artists developed during the Oseberg style period were designed in a carpet-like manner, and they set a precedent for the next five styles of Viking art. The gripping beast motif was probably the essential characteristic of the Oseberg style, and its variations could be found on most 9th century artifacts used for religious purposes. Like the other five, this style is named after the archeological site where its best-preserved object was found, and in this case, it was the Oseberg ship burial mound. Just like the name suggests, the Oseberg ship was more of a grave than a boat meant to sail across the seas, and inside of it, archeologists found skeletons of two women showered with a substantial amount of grave goods.

Viking artists made sure that together with carved wooden animal-head statues, they heavily decorated the ship with gripping beast motif, the most striking Oseberg style feature. In his books about Viking history, English archeology professor Graham Campbell says that the gripping beast motif had a deep meaning for Norse people during the medieval times since it managed to stay relevant for more than 150 years.

Borre style is the second stage in Viking art history, and it got its name after bridle mounts archeologists found at a ship burial in Borre, Norway. The crucial thing to remember about the Borre style is that it never replaced Oseberg completely; it was only an enhancement to already existing motifs in Viking art. Interlaced geometrical forms and ribbon animal patterns were the two most fundamental characteristics of Borre and could be considered innovations compared to Oseberg.

In Borre, everything was about filling in the blanks. For example, if you saw a simple animal head post placed on a Viking ship, you could tell that its creator probably lived during the Oseberg period. Yet if the animal motifs on that object were heavily decorated with ring chain circles or spiral hips around the centerpiece, you could tell these wood carvings were work of a Borre artist's hands.

As they traveled, Borre artists spread the Norse influence all across the British Isles and the Baltic region. Additionally, they managed to bring to perfection Viking wood carving techniques that were already exquisite.

YOU MAY LIKE: Drakkar Ship Handcrafted Bronze Viking Accessory 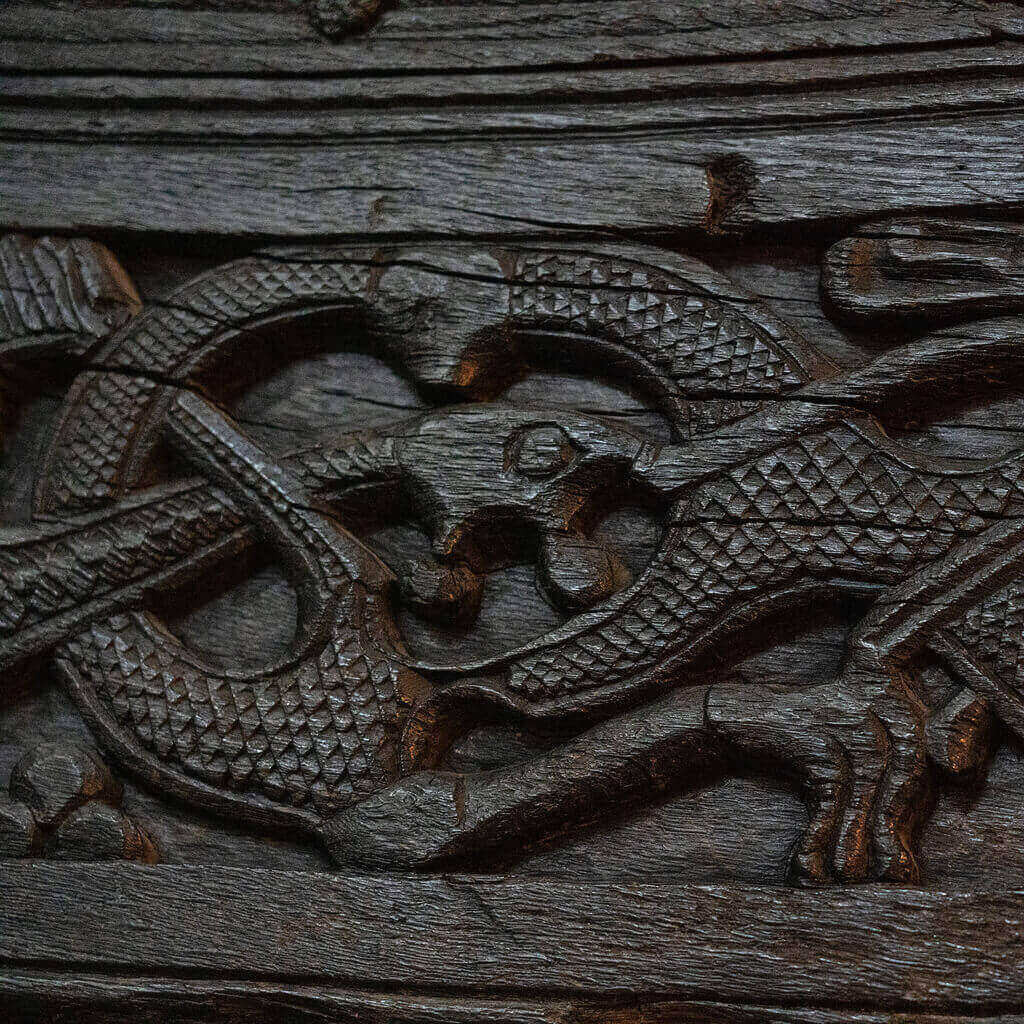 The jelling style first appeared in Northern Europe during the first years of the 10th century, and it continued to stay predominant art style for more than seven decades. During Jelling, Viking art started developing more towards carving stone, and previously favored materials like wood soon fell into oblivion. By the second half of the 10th century, the use of carved stone became essential for almost every religious ritual in medieval Norway. By the end of the 10th century, it was time for Jelling to say goodbye to the Viking world. 11th-century artists started adopting an entirely new style of art-Mammen.

Archeologists found the first examples of Mammen style near a village Mammen in Jutland, Denmark, inside a burial mound of King Harald Bluetooth's. Among many highly decorated objects made of stone, archeologists found an art-piece worthy of any national museum - the Mammen axe. While one side of the axe head was decorated with motifs of various animals rounded with asymmetric scrolls and ornamental outlines, the other portrayed a large ribbon-like bird, with its full body, wings, crest, and circle-shaped eyes.

Despite its delicate motifs and unique place in art history, by the 10th century, Mammen was suppressed by Ringerike.

Ringerike style received its name from the Ringerike district of Oslo, Norway, where the famous Vang Stone was discovered. While one side of the stone was decorated with commonly used animals like lions, birds, and serpents, the other was illuminated with runic inscriptions. By the beginning of the 11th century, art historians discovered significant differences in Viking styles when portraying animals. Ringerike artists preferred their carved animals exceedingly thin and long, with almond-shaped eyes. In contrast, the artists who chose some of the previous styles preferred the animal figures to be thick and round.

Some historians like to say that Mammen was only a transitional period between two styles. It slightly transformed Jelling animal motifs, preparing them to reach their final shape in Ringerike during the first half of the 11th century. Unlike Oseberg's gripping beast, Ringerike style animals were presented very peacefully.

The last of six Viking art styles is called Urnes and reached its peak during the late 11th and early 12th century, during which time most Vikings were in the process of Christianization. Although it was a long and slow process, Christianity not only heavily influenced religious practices across Scandinavia but also had a great impact on then-popular art styles. The style of art born out of Viking Christianization called Urnes is often characterized by thin animalistic images interwind into narrow patterns. The artistic focus is now on Christian elements, and Norse art is there to enhance it. As time went by and Vikings became more prone to Christian faith, stories from Norse mythology began to fall into oblivion. Carved animals on runestones and stave churches presented in both circular and open compositions were becoming thinner and thinner until one day they turned into ornaments made out of lines.

Urnes style is named after the 12th-century stave church in village Urnes, Norway. Urnes stave church is decorated with both Norse and Christian ornaments and therefore is a precious museum protected by UNESCO.

HOW DID THE VIKINGS AFFECT THE ART WORLD? 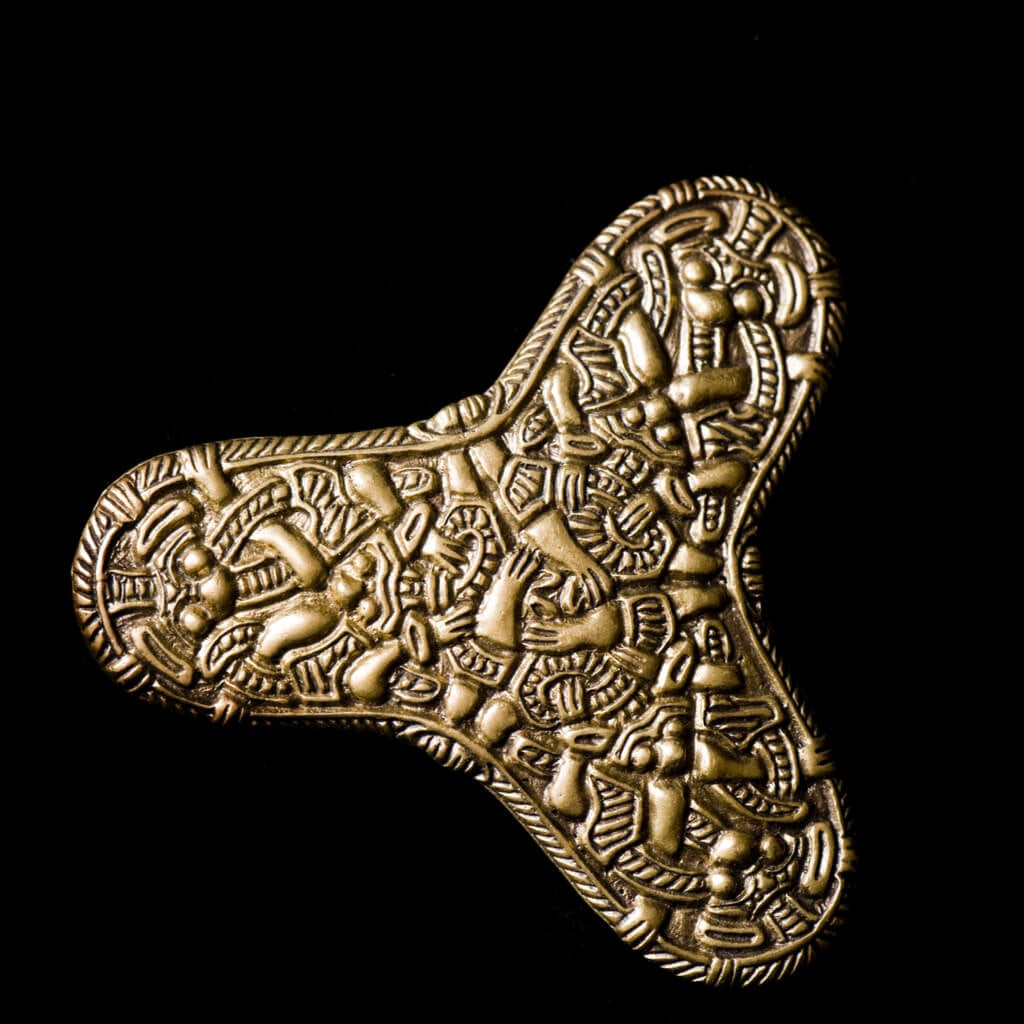 Many prominent artists decided to pay homage to Viking art in various novels, poems, songs, comics, movies, and TV shows. And German composer Richard Wagner was one of them. His capital work called The Ring of the Nibelung was almost entirely based on Norse mythology stories. At that time, Wagner had no clue that his cycle of music dramas would become widely recognized among the public, and they would inspire a man called John Ronald Reuel Tolkien to write 'Lord of the Rings,' one of the best-selling books ever written.

Apart from classical music, Viking art served as an inspiration to many heavy metal musicians who even created a separate genre called 'Viking metal.' Heavily influenced by Norse art and mythology, the Viking metal style peaked in popularity during the early and mid-1990s, but it continues to inspire present-day musical artists.

Viking art strongly affected the television world as well. Legends from Prose and Poetic Edda served as an inspiration to Marvel Comics, who in 2006 published the comic book about a fictional villain named Ragnarök who used his supernatural abilities against protagonist heroes from the Marvel world. In 2017 Marvel studios produced a movie based on this comic book and named it Thor: Ragnarök.

It is safe to say that the Vikings had the extraordinary ability to turn everything they did into art. From warfare and shipbuilding to decorating objects, there is hardly any skill Norsemen found hard to master.

Although their art isn't the primary phenomenon that celebrated medieval-day Scandinavia, it is essential to remember it existed and still is a massive part of Norse art history. The purpose of Viking art was never to create objects that were only for the sake of art but to embellish the ones that were already in use and therefore ease the hurdles of everyday life.

So if you don't consider yourself an artistic soul, try to find some inspiration in this simple yet powerful message Viking art sends us.

Until our next Viking meeting, we leave you with these words of hope,