Throughout some of the articles so far, we have mentioned the underworld in Norse mythology. You surely know about the most famous place where the souls of the dead in the Norse universe go is Valhalla. But you might not know that it's not the only place where they can end up.

Believe it or not, it is not even the most important place.

In addition to the well-known Valhalla, the soul in the afterlife can end within four more realms of this fascinating mythology. Those are Folkvangr, Ran, Helgafjell, and Helheim.

Now let's go over this topic a little more extensively and talk about what happens to the humans and Gods after their death, where they go, and who rules over them.

AFTERLIFE REALMS AND WHO RULES OVER THEM

Let's start with information that is crucial for this topic. The beliefs of Norse mythology say that each person is made up of four segments:

When Hamr leaves this world, his Hugr goes on to the afterlife.

Although less known, this place is the first and preferred option of the fallen Viking warriors. Folkvangr (Old Norse Fólkvangr) can be translated as "field of the host," "army field," or "people field." The Goddess Freya, a Norse mythology Goddess of love, beauty, and fertility rules over this realm. 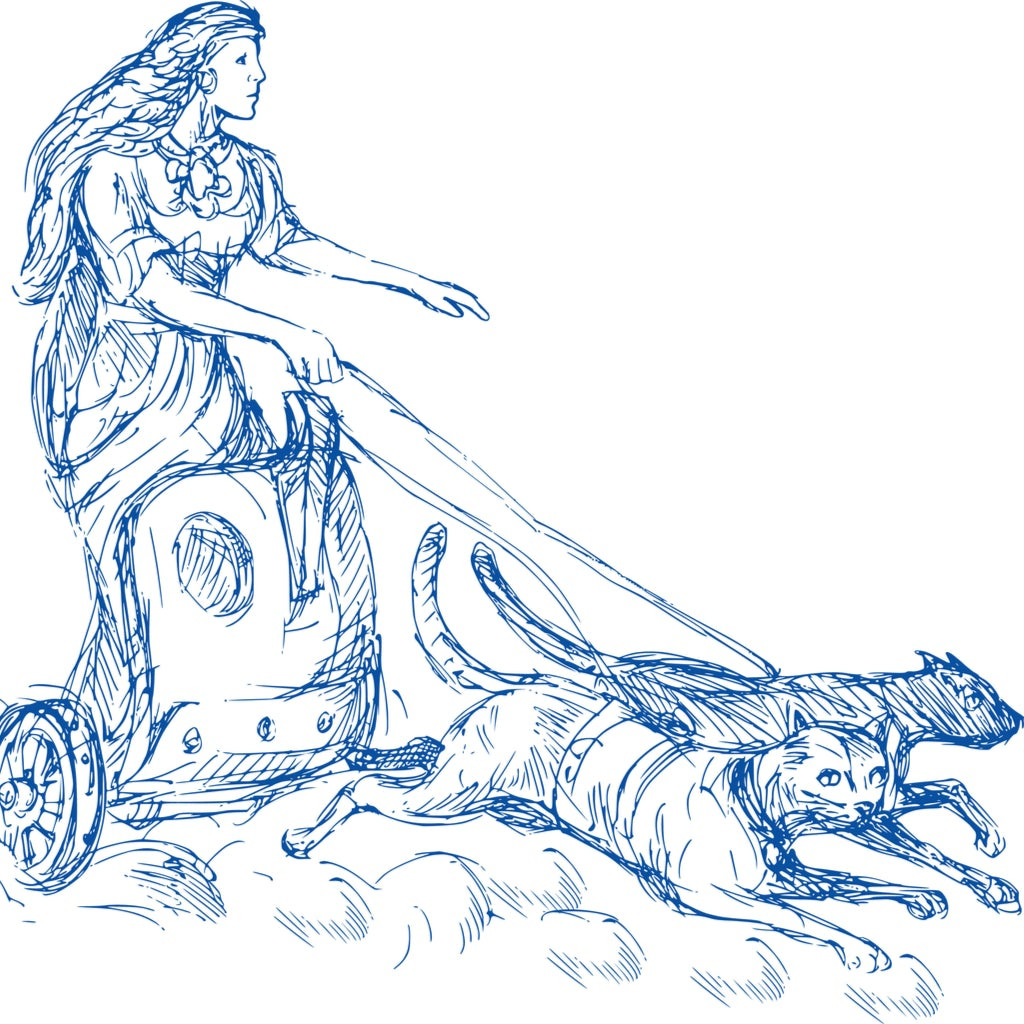 When famous Viking warriors fall on the battlefield, Freya has the right to choose first, and she takes half of them to Folkvangr. The other half belongs to Odin, and they go to Valhalla.

Folkvangr is a heavenly field where lies the great hall of Goddess Freya called Sessrúmnir. Unfortunately, a more detailed description of Folkvangr is rarely mentioned in the ancient texts about Norse mythology. So, today we do not truly know what Folkvangr exactly looked like.

But one thing is sure, just like the fallen warriors of Valhalla, the dead of Folkvangr were going to fight on the side of the Norse Gods when Ragnarok begins.

The most popular realm of the fallen nowadays is without a doubt, Valhalla (in Old Norse Valhöll, meaning "hall of the slain"). It is one of the great halls of Asgard. This hall belongs to the God Odin, the ruler of all Norse Gods. We all know that Odin has many titles, and one of those is the God of Death title.

As we have already mentioned, the second half of the fallen warriors that Goddess Freya didn't take belong to Odin. The dead leave the battlefield led by Valkyries and travel to meet Odin, the All-father, in Valhalla. In this great hall, the dead warriors fight and feast unto the coming of Ragnarok, when they are destined to fight alongside Odin and the rest of Norse Gods during the last battle.

Those warriors are called Einherjar.

Since we will talk far more about Valhalla in one of the following articles on Norse mythology, we will finish the story of this famous hall of Odin here.

Taking into account that the Vikings were often at sea, it makes sense that there was a place in the afterlife for them too.

Ran (Old Norse Rán) is a giantess from Norse mythology, and she is a personification of the sea. This giantess lives in the depths of the ocean, in the realm full of various treasures that come from sunken ships.

Ran often catch sailors with her nets, drowns them, and force them to live with her forever in the watery afterlife. Based on the literature of Norse mythology, the best description for the giantess Ran is: "the embodiment of the sinful side of the sea."

Helgafjel can be interpreted in many ways. In some literature on Norse mythology, it represents the holy mountain. Still, other sources say that Helgafjel is any mountain near the body of the deceased Viking.

The life of the deceased living in Helgafjel is described as almost entirely the same as the life spent while they were alive. This afterlife realm is filled with a lot of happiness and love, where the dead live with their loved ones.

As written records of Norse mythology show, most Vikings who do not die in battle or at sea will most likely end up in Hel / Helheim. Based on Norse cosmology, this realm is located below Midgard and reigned over by Hel, the Goddess of Death. Hel's realm is located between the roots of the Norse Tree of Life called Yggdrasil.

This underworld realm of the dead is separated from the rest of the Norse universe by a swift river Gjoll that stands between the two worlds and is impossible to be crossed. There is also a massive heavy door at the entrance of Helheim. They are guarded by a monstrous hound called Garm.

When a soul enters Helheim, it can no longer return. Not even if it is a God.

As a matter of fact, one of the most loved Norse Gods, Baldur, son of Odin and Frigg, ended up in Helheim after his tragic death. Odin, the All-father, with all his knowledge and wisdom, was not able to bring Baldur back to life.

The only being in the Norse universe with the gift of bringing the dead back to life was Hel, the Goddess of Death. This is the proof that Goddess Hel was more powerful in her realm than any other Norse Gods, even the almighty Odin himself.

We deliberately mentioned this interesting story about Baldur, because it is proof that the Gods of Norse mythology could not cheat death, and that death was final even for them.

If you imagine Helheim as a place where the dead are tortured and spend eternity in suffering, you would be wrong. As a matter of fact, it's pretty much like the life of the living Vikings of that time. Most of the dead in Helheim spent their time drinking, eating, fighting, practicing magic, and sleeping.

It is not really such a bad place to be in the afterlife, isn’t it?

HELL IN CHRISTIANITY VS HELHEIM IN NORSE MYTHOLOGY

Through what we have read so far, we can conclude that the Norse mythology has comprehension of death that is different from the understanding spread throughout the world today – division into Paradise ( think of it as a reward), and Hell (sort of punishment).

It is assumed that due to the influence of Christianity in later Norse mythology, we can find a place similar to Hell as we know of today. This place is called Nastrond and is one part of Helheim. Those responsible for murders, and oath-breakers (Vikings considered oath-breaking to be the worst crime possible) were doomed to spend their afterlife in Nastrond.

Nastrond (Náströnd in Old Norse, meaning "shore of corpses"), is a place of eternal punishment for those who sinned during their lives. The door of this place is facing north, and the ceiling is full of snakes that release their venom, which falls and fills the room where the dead spend their time.

Also, the dragon Níðhöggr comes to Náströnd to chew and suck the blood out of the corpses of the dead. In this part of the Helheim, the dead spend their afterlife in eternal pain and suffering.

HEL, THE NORSE GODDESS OF DEATH 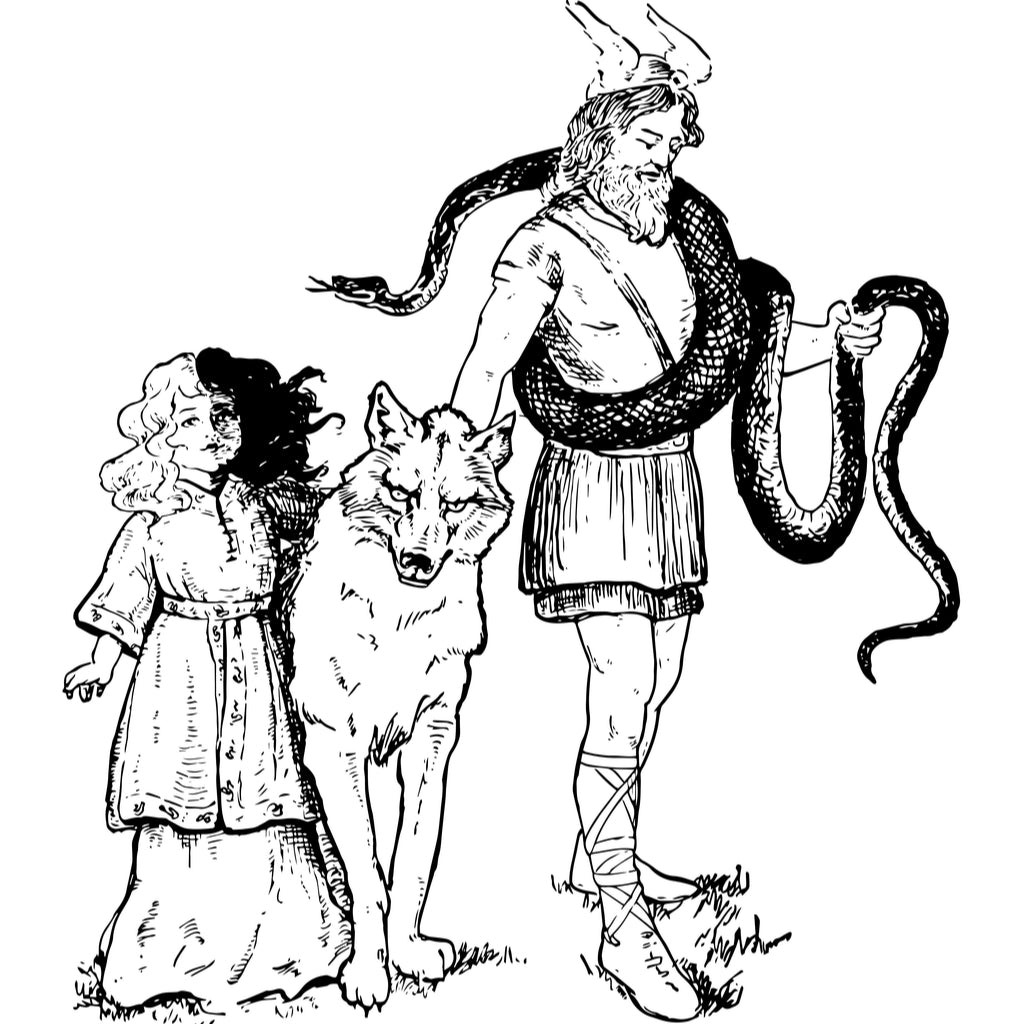 Lastly, let's say a few words about perhaps the most famous Goddess of Death in Norse mythology, Hel.

Hel (Hel in Old Norse, meaning "Hidden") is the Norse Goddess of Death who rules over the same-named realm of Hel/Helheim. It is the underworld where most of the dead dwell. Meaning of her name – hidden, is related to the dead getting buried beneath the ground and staying out of sight.

According to Snorri Sturluson, Goddess Hel is the daughter of the trickster God Loki and the giantess Angrboda (Angrboða in Old Norse, meaning "Anguish-boding"). Therefore she is the sister of Jormungand, the World Serpent, and the wolf Fenrir. This origin makes Hel part of a highly disreputable and dangerous family of the Norse pantheon.

Goddess Hel was a role model for the Marvel's screen adaptation of Thor's sister Hela in the movie Thor: Ragnarok. The beautiful Kate Blanchett "gave life" to Hela in the movie. However, don't think about the Goddess of Death in that way.

HEL'S APPEARANCE AND HER BANISHMENT TO HELHEIM

One half of Hel is dead while the other half is quite beautiful. Also, Hel has one fiery eye, which could only see the truth so that nobody could hide anything from her. Goddess Hel is usually shown as being rather greedy, rigid, and rough, or at least neutral to the interests of both the living and the dead. 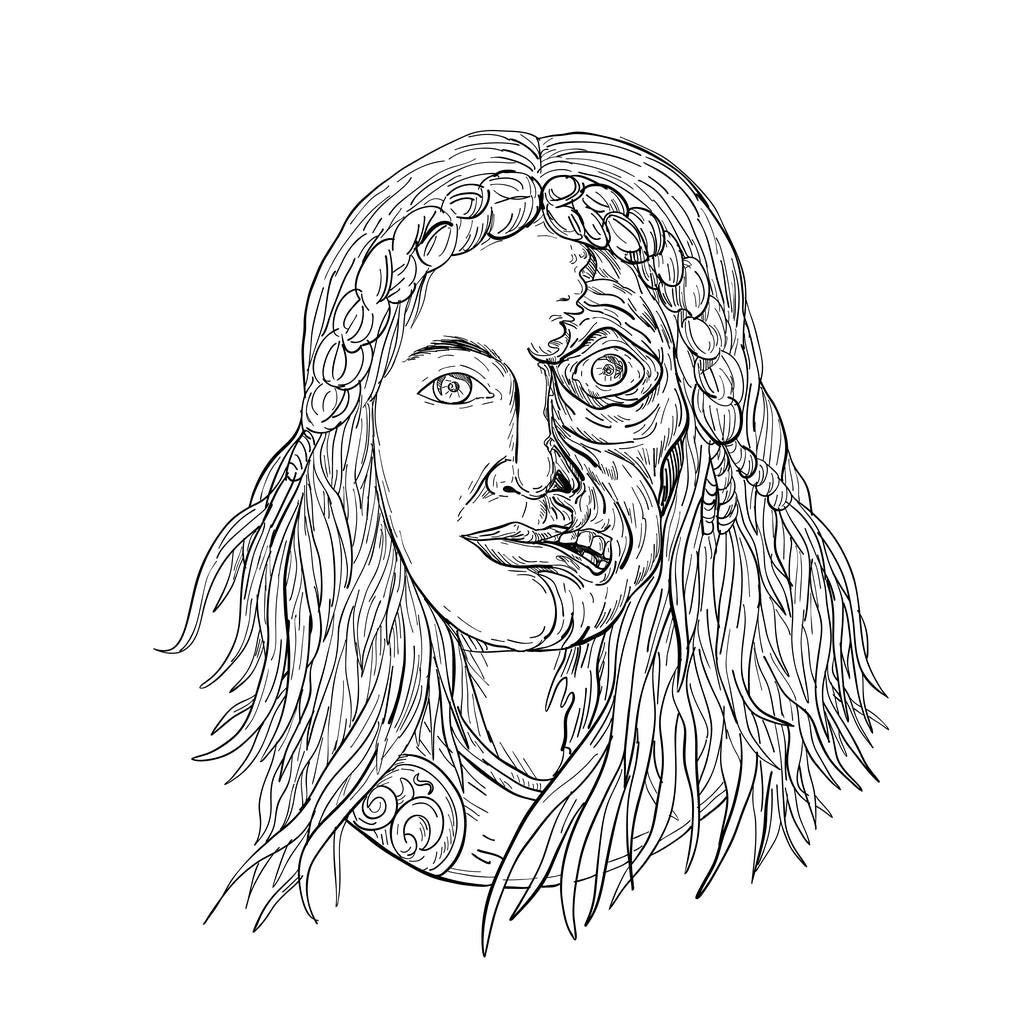 As a matter of fact, her appearance was the crucial factor why Hel was sent from Asgard to Helheim. It was because of her appearance that frightens the other Norse Gods and Goddesses who lived in Asgard, Odin agreed to send Hel away, and gave her the crown of Helheim.

In Helheim, Goddess Hel is served by two servants called Ganglot and Ganglati. These two were moving so slowly that they seemed to be standing still at all times. Ganglot and Ganglati served her food in a plate named "hunger" and with a knife called "famine."

Then again, Goddess Hel is only rarely mentioned in the existing literature on Norse mythology. It means her personality is poorly-defined, and her character is not developed enough. There is even a theory that Hel is just a figment of the imagination of some Norse poets, but we don't believe in it. Do you?

INTERESTING FACTS ABOUT THE NORSE GODDESS OF DEATH AND THE UNDERWORLD

These are some interesting facts for which we do not have evidence, but only just the theories:

Although this may be true, we cannot confirm these facts, and it is up to you to decide whether they are true or not.

LET US FINISH THIS STORY HERE

There are very little literature and evidence of Norse mythology afterlife that can describe life after death in more detail. And even fewer sources that have not been influenced by Christian beliefs.

At least we are sure that there was more than one ruler of the afterlife. Where would you like your Viking Hugr to go when the time comes? Our choice is definitely Helgafjel.

We have tried, and we hope that we were able to explain to you the afterlife of the brave Vikings. As always, if you have any additional questions or you think that we skipped some essential details concerning the Gods of Death and the afterlife in the Norse mythology, feel free to write to us in the comments section below.