Home / News / Mjolnir/Mjölnir, What does mean?

Mjolnir/Mjölnir, The Hammer of Thor: Meaning and Symbolism in Norse Mythology

Mjolnir, the Hammer of Thor is undeniably one of the most popular fictional objects in popular culture today. It has been helped in no small part to that position by the spectacular success of the Avengers movie series and especially the popularity of Thor, the Norse god who wields it.

However, as is all too often the case with the Hollywood version of anything it portrays, almost everything the layperson learns about this mythological object by watching the films, from the story of its origins to the magical properties with which it is imbued, differs significantly from the original source material.

The Mjolnir/Mjölnir is actually part of the Norse mythology of the peoples of Scandinavia and tales of its creations and marvelous feats are about a thousand years old.

The name, ‘Mjolnir’ is commonly accepted to mean ‘Lightning’ in the capacity as the hammer of the God of Thunder but the root word is more similar to the words ‘grind’ or ‘crush’.

Here, we delve into both the original myths that entranced the Norse people over centuries, and their modern counterparts created by storytellers today which are based loosely on those originals.

The Mjölnir in Norse Mythology

The gods and goddesses of Norse mythology are rich, multi-layered characters, significantly more nuanced and ambiguous than their black-and-white depictions as heroes or villains that we see in Hollywood movies.

Most people are shocked to learn that the mighty Hammer of Thor was created not at the behest of a ‘good guy’ character liked Odin, Thor’s father, but by Loki, who is seen as Thor’s arch rival. Norse storytellers did not paint Loki as a villain per se but rather as a mischievous character; in fact, he is known as ‘The Trickster’ in the tales of old.

The story of the origin of Thor’s Hammer begins with Loki in an especially impish mood. While larking about, he decides to shave off the prized blonde tresses of Sif, Thor’s wife.

The God of Thunder, always quick to ire and already sharing an acrimonious relationship with his brother, seizes Loki and is about to kill him when Loki pleads for a chance to redeem his wrong.

He proposes to travel all the way to Svartalfheim, home of the Dwarves, deep under the ground. The Dwarf race were regarded as master craftsmen and Loki suggested that they would be able to fashion a new head of golden hair for Sif more beautiful than the one he ruined. Thor spares him upon that promise and the irreverent god makes his way to Svartalfheim.

There, the sons of the dwarf Ivaldi with their vast talents did manage to create new golden locks for Sif, as well as Skidbladnir, a ship whose sails always swelled with a favorable wind and which could be folded up to fit in a pocket, and Gungnir, the deadliest of all spears.

Loki’s roguish impulses could always be counted on to find sport in any circumstance, and instead of leaving for Asgard with the three worthy treasures, he decided to indulge in his usual passion for trickery and mischief.

Showing the golden tresses, ship and spear to two other Dwarf brothers, Brokkr and Sindri (or Etiri), he taunted them saying they could not match that level of craftsmanship.

The brothers accepted the challenge on a wager – if the gods in Asgard judged their creations to be superior to those of the sons of Ivaldi, they would have Loki’s head in return. Loki, complacent in the belief that the treasure he held could not be bested, amiably agreed.

Brokkr and Sindri made three magical masterpieces of their own. The first was Gullinbursti, a living boar with golden hair that gave off light in the dark and could run better than any horse through land, water or air. The second was Draupnir, a ring from which fell eight new golden rings of equal weight every ninth night.

The third was Mjölnir.

Apart from its exquisite craftsmanship, Mjölnir was created with spells that ensured that it would never miss its mark, and that it would always rebound back to its wielder.

When the two dwarves presented them to the gods, Odin declared their creations superior to those of the Sons of Ivaldi. The hammer was presented to Thor in his capacity as defender of Asgard.

Thus, there was once a time when the character of Thor did not wield the Hammer that has become virtually synonymous with his name. Once it was in his hands, though, it is said that they will not be separated until the cataclysmic events of Ragnarok foretold in the Norse sagas.

The Hammer of Thor, for all its destructive power and primary role as a weapon of war, is also a tool of rejuvenation and regeneration, and the catalyst for the rebirth of the world after Ragnarok.

It is perhaps quite unfortunate that the image of the Mjolnir in popular culture has been molded from movies and comics rather than a reading of the original Norse sagas.

However, it is also probably true that without those forays into popular media, the Norse gods, goddesses and their stories would never have entered the popular consciousness to the extent that they have.

There are actually three different origin stories for the Hammer of Thor in the comic world (upon which the movies starring Chris Hemsworth as Thor are based).

They all maintain that Mjolnir was crafted by Dwarven blacksmiths, but crucially also introduce the fictional element uru, a metal described as native to the Asgardian plane. Perhaps more importantly than any of the other variations from the original, the Hammer of Thor in the Marvel world carries an inscription on its side which reads:

Whosoever holds this hammer, if he be worthy, shall possess the power of Thor.

The use of uru and the inscription are both plot devices that allow storylines which imbue the hammer with fantastical properties and create a variety of interesting story webs. 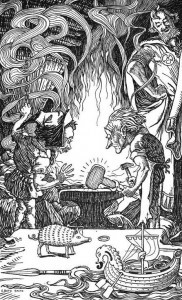 The first and earliest version is virtually identical to the one found in the Norse saga; it does not differ dramatically from the tale told by the Norsemen of old because the authors tried to incorporate elements and characters from the original to create a tangible link between old and new.

The only significant difference was that Odin, the king of the Norse gods who was also known as Woden or Wotan wielded Mjolnir first, and only passed the hammer to Thor after the latter proved himself worthy.

The second version from the comics is the one incorporated into the storyline of the Thor movies starring Chris Hemsworth. In it, Mjolnir is created by the Dwarf blacksmiths Brock, Etiri and Buri upon the orders of Odin.

They craft it in an enchanted forge inside a dying star using a process is so powerful that it destroys the star and causes the cataclysmic events that wipe out the dinosaurs on Earth.

The third version speaks of a sentient being called the Mother Storm, a giant storm of galactic proportions that threatens Asgard. As king and defender of the realm, Odin engages it in battle, eventually defeating the mighty being and trapping it within a nugget of uru gifted to him by the Dwarven blacksmiths.

Wishing to harness its immense power as a tool and a weapon of war, Odin asked the dwarves to fashion the nugget into an object that he could wield. When the dwarves created Mjolnir upon his request, Odin found that he was unable to harness it with enough control for it to be a reliable asset.

He put the weapon aside and Mjolnir was forgotten for eons until Thor found it. He was able to lift the magical object, making it his personal weapon. This earned Mjolnir the moniker ‘Hammer of Thor’.

The Fantastic Abilities of Mjolnir

One of the most interesting elements of the modern legend behind the Hammer of Thor is that it cannot be lifted by an individual who is not pure of heart.

Forget the villains, even the most powerful and mighty of the heroes of the Marvel universe have been left found wanting in this regard. Certain individuals have been successful on occasion, and they include Superman, the Incredible Hulk and Thor’s grandfather, Bor.

For others, Mjolnir is simply an infinitely-heavy hammer-shaped object. Thor has, on several occasions, used this fantastic characteristic of his weapon to imprison his foes by simply placing it on them, rendering that individual immediately immobile.

Mjolnir as a Weapon and Tool

Mjolnir can be wielded as both an offensive and a defensive weapon. Possessing sufficient power to level mountains, it can emit blasts of mystical energy, control the electromagnetic force around an object, manipulate matter at a molecular level and generate powerful shockwaves that harness a planet’s gravitational force.

It also has the ability to generate a force field strong enough to contain an explosion so powerful that it is capable of destroying a galaxy, deflect and counter any offensive force and spontaneously destroy undead creatures like vampires.

The Hammer of Thor also possesses a variety of virtually limitless abilities including the creation of antimatter particles, tracking an individual or object, absorbing radioactive energy, detecting and projecting illusions, and can even summon the spirit of someone who swore upon it while alive.

Thor has used it for time travel and to manipulate the weather on a planetary scale, too. In some Marvel storylines, the Asgardian has used it to disguise himself in the appearance of a mortal, whereupon the Hammer projects itself as a walking cane.

The Hammer is intimately linked to Thor, and will fly back to his hands when summoned, even if it has to travel through entire planets on the way.

Can the Hammer of Thor Be Destroyed?

Its celestial origins imbue the hammer with virtual, but not complete, indestructibility.  However, that leaves ample room for a variety of situations where Thor has been left stunned at the damage and even the complete destruction of Mjolnir.

The most iconic of these at this point is the trailer for Thor: Ragnarok, due for release in 2017. In it, one of Thor’s archrivals, the Asgardian Goddess of Death, Hela (portrayed by Cate Blanchett) is shown destroying Mjolnir during a battle with Thor.

How, or indeed if, Thor will be able to continue battle bereft of his primary weapon remains to be seen.

In the comic world, the Hammer of Thor has been damaged and destroyed a number of times. While it has survived bullets and anti-matter, force beams from Asgardian gods and goddesses, clashes against other uru weapons like those wielded by Loki’s Storm Giant army, and attacks from other celestial beings have left Mjolnir either in pieces or completely disintegrated.

One Marvel character, Molecule Man, even vaporized Mjolnir by destroying the bonds between the uru molecules that kept the relic together.

The fascinating original and modern myths and legends behind Mjolnir, the Hammer of Thor, make it one of the most popular objects from the ancient world with which we are familiar today.

It is commonly worn as a symbol on rings and pendants by those who aspire to the noble qualities possessed by Thor, the Norse God of Thunder.